In a study involving alternative therapy, researchers including SK Batra and colleagues from the Department of Biochemistry and Molecular Biology at the University of Nebraska Medical Center studied the effects on pancreatic cancer cells (ductal adenocarcinoma of the pancreas) of ocimum sanctum, a traditional medicine from India known more commonly as “Holy Basil,” that has been in use for thousands of years. 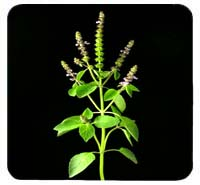 This is a pre-clinical study, but it is of interest in the sense that Holy Basil – known to have medicinal properties for thousands of years – could become a source for new compounds in the therapy of pancreatic cancer.  Further research required.

Does the Starting Time of Chemo After Pancreatic Cancer Surgery Matter?

Alternative or Complementary Therapy for Cancer Treatment: Is It the Right Decision?